You are here: Home1 / Androgenetic Alopecia 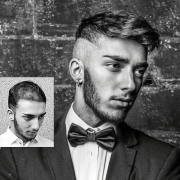 Tens of millions of people in the United States have some degree of androgenetic alopecia. This most common form of hair loss affects both men and women, up to 70% and 40% during their lifetimes, respectively, and accounts for nearly 95% of all male hair loss. So what is it?

Androgenetic alopecia is actually a diagnosis of many names, often referred to as hereditary baldness, genetic baldness, male pattern hair loss, or female pattern hair loss. As its many titles suggest, this form of alopecia is passed from either parent to the child as a genetic trait which through complex hormonal changes over time, leads to hair thinning and baldness. The rates at which androgenetic alopecia present itself increase with age. In men, for example, 25% have some degree of hair loss by age 30, a number which more than doubles by age 60, when 2/3 of men have some degree of hair loss.

Extensive progress has been made towards understanding both the mechanisms of androgenetic alopecia and the ways in which hair restoration specialists can help their patients to combat its effects, and while men’s non-surgical hair replacement is an impressive and realistic and shockingly natural looking, further research continues.